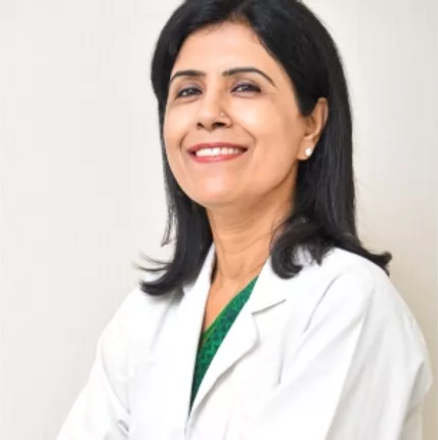 Brief Profile:
Dr. Anjali Kumar is an alumnus of prestigious Lady Hardinge Medical College and possesses over 28 years of post-graduate experience in the field.
She is a renowned gynecological endoscopic surgeon, having done certificate course in endoscopy from Ethicon endo-surgery institute and world association of Laparoscopic surgeons and has till date performed many complicated gynecological laparoscopic and hysteroscopic surgeries (Total laparoscopic hysterectomies ,Laparoscopic assisted vaginal hysterectomies, Lap ovarian cystectomies, laparoscopic fertility enhancing surgeries, Laparoscopic Myomectomies and Operative Hysteroscopic surgeries).
She also has special interest in high risk obstetrics and fetal medicine and has attended and has been invited as faculty in various national and international conferences in these subjects.
She has developed a technique called ‘Reverse Uterine Closure technique’ for suturing of very thin lower uterine segment in previous LSCS patients. This technique was presented, published and accepted at the national conference (AICOG 2015) and later at the apex international conference, FIGO Vancouver 2015 as ‘Kumar’s Technique’. She has pioneered the concept of ‘Natural Child Birth’ in and around NCR. She is the first one to start patient educational programs and labor preparation antenatal classes for the expectant couples in Gurgaon. She has developed patient strategies and labor protocols to increase normal delivery rates and decrease caesarean /instrumental deliveries. She routinely encourages and has successfully did lot of VBAC (Vaginal Births After Caesarean) cases.
She routinely employs and encourages labor analgesia methods (inhalational analgesia, epidurals, paracervical /pudendal blocks for easy and comfortable birthing experience.
She has been actively contributing to the society through electronic & print media and has featured in various television talk shows by Doordarshan (DD news), NDTV (Bringing up babies, WE the people) etc. She has also featured in various web based talk shows on gynecology. She has authored a book on pregnancy, ‘I am Blesssed’ for the expectant couples and a small booklet on breastfeeding for the new mothers. She also features in various columns on gynecology related issues in leading newspapers and magazines like Savvy, Good Housekeeping etc.
Dr. Anjali Kumar has been practicing in Gurugram for more than 17years now and has successfully managed various challenging and complicated gynecologic and obstetric cases in Gurgaon and referred cases from all over Haryana. In the past, she has headed the obstetrics and gynecology departments at Paras Hospital, Gurgaon and various army hospitals during her stint with Army Medical Corps and was recognized as a Graded Specialist in Gynecology.

Honors & Awards:
• She has been invited as faculty, panelist and speaker in various national and international conferences.
• She was awarded in 2019 by 'The Economic Times' ass "Inspiring Gynecologist of north India'