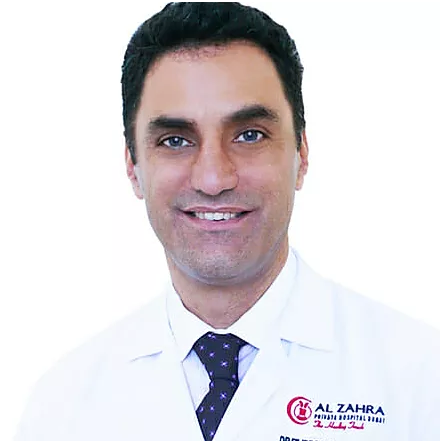 Dr Filippos Georgopoulos is a Consultant in Gastroenterology and Hepatology at Al Zahra Private Hospital in Dubai, UAE since late 2012.
He is a graduate of University of Crete in Greece finishing his Gastroenterology Fellowship training in Athens General Hospital in Greece in 2000.
He subsequently subspecialized with a clinical fellowship in advanced therapeutic endoscopy and Endoscopic Retrograde Cholangiopancreatography (ERCP) at Glasgow Royal Infirmary in Scotland where later he became Consultant Gastroenterologist up to 2003.

His next step was back in Greece, working as Consultant Gastroenterologist and Hepatologist for 10 years up to 2013 at Nikea General Hospital which is a tertiary Hospital in Athens. He was responsible for the advanced therapeutic endoscopy and ERCP lab performing annually hundreds of cases with complex biliary, pancreatic and gastrointestinal lumen procedures.
Dr Filippos Georgopoulos has also huge experience in treatment of Inflammatory Bowel Disease patients (Crohn’s disease and Ulcerative Colitis) working previously in a Gastroenterology Department which had been awarded by the Greek Ministry of Health as a referral center of excellence for Inflammatory Bowel Diseases. His expertise also includes diagnosis and treatment of coeliac disease, motility Gastrointestinal disorders like oesophageal achalasia, colonic inertia as well as common GI problems like Gastroesophageal reflux, chronic diarrhea, abdominal pain etc.

He is currently employed at Al Zahra Private Hospital in Dubai in UAE as consultant Gastroenterologist and Hepatologist responsible for the special clinical Gastroenterology as well as interventional endoscopy services that the hospital provides.