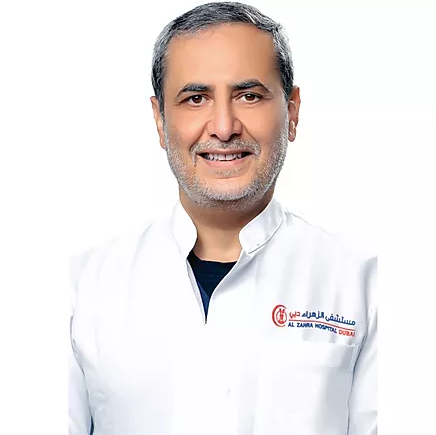 Dr. Samih Tarabichi is an Emirati national regarded as the foremost orthopedic surgeon in the Middle East. He is serving as a chairman of Tarabichi’s Centre of Joint Surgery in Alzahra hospital Dubai planning to fundamentally change the orthopedics sector in the region.
He is practicing advanced orthopedics since 35 years having performed over 14000 joint replacement surgeries in USA and UAE on patients from all over the world.

He earlier trained in orthopedics at McGill University in the United States and practiced there for over 10 years. When he returned to the UAE, knee replacement was a rare procedure. But he worked hard to establish a program for joint surgery in Dubai.
Dr. Tarabichi pioneered the first center of excellence for joint replacement and advanced orthopedics in the Middle East alongside launching a fellowship training program for joint replacement which helped improve the quality of joint surgery in the world.

Dr. Tarabichi holds six orthopedics patents in the United States that cover various aspects of joint replacement surgery, also consultant for Zimmer International and on the design team for a new generation of knee implants. Specialized in the characteristics of the Asian and the Arab knee and has published many papers in international medical journals on the differences between the European and Asian knee.

Dr. Tarabichi is a member of various medical organizations and associations across the world. He is Fellow American Academy of Orthopedic Surgeons since 1990, Fellow of the Royal College of Physicians and Surgeons in Canada since 1988, and Member of the GCC Orthopedics Association and of the Emirates Orthopedic Association.