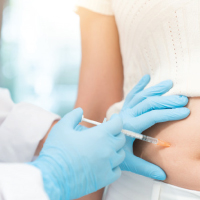 The contraceptive shot contains progestogen which typically suppresses ovulation, keeping your ovaries from releasing an egg. In addition, it thickens cervical mucus, to keep sperm from reaching the egg. Depo Provera is a well-known brand name for medroxyprogesterone acetate (DMPA), C₂₂H₃₂O₃. It is also known as 6α-methyl-17α-hydroxyprogesterone, a synthetic pregnane steroid with a molecular weight of 344.5g/mol.

Depo shot effectiveness is famous among other birth control shots. This makes this brand more popular compared to other contraceptive shots.

This birth control shot effectiveness is expressed in the following benefits:

Just as there are benefits, depo conceptive shot also has some disadvantages. They include:

Depo shot is the most widely accepted and most effective birth control shot. Depo Provera’s side effects are limited, which occur mostly at the early stage of its administration, and go away with time.  Research has shown that Depo Provera records almost 100% success in controlled unplanned pregnancies. Despite all its merits, some people may not be privileged to use the shot.

Your healthcare consultant might discourage you from using Depo Provera if you have:

Depo birth control shot side effects include the following:

Delay in giving birth may be up to 10 months or more before you begin ovulation again.

You will need your doctor’s prescription. Your doctor will do the following, before prescribing the shot for you:

A Depo Provera dose or shot is best taken in a hospital or healthcare center. Ensure you’re not pregnant or don’t intend to get pregnant in the next few months.

Depo-Provera is an injective and intramuscular contraceptive. It is advisable to use alternative contraceptives, such as condoms, along with the injection for at least 7 days from the day from start, as a backup. Your doctor or nurse (whatever case) may likely give you your first injection within 7 days of the start of your period.

If you have just given birth, your first injection will be done within 5 days of giving birth, even if you are breastfeeding. However, Depo Provera can be taken at other times, but you need to take a pregnancy test.

Depo shot period lasts 13 weeks (approx. 3 months). Maintain a medical record, which must state the exact date of each dose, for future reference. Backup birth control is not necessary after subsequent injections provided you take them on due dates.

Depo shot cost is not fixed, it varies in different countries and locations. However, the U.S dollar rate is often used as a scaling system.

Depo Provera price in the U.S is between $100 to $150 for one shot. But in some cases, medical insurance covers this birth control shot and it is given at no cost at all.

Medroxyprogesterone acetate (DMPA), the most widely used progestin, is the only objective and different companies have produced this consecutive shot under different brand names. Some include:

Another DMPA, which is also of 13-weeks duration, has the same functions and side effects almost similar to those of the Depo Provera shot. It is given under the skin of your outer thigh or your abdomen (your stomach or tummy, as it is fondly called).

This is another injective contraceptive, and an intramuscular dose, that can last 8 weeks; also known as:

If deep injection stops your periods, you cannot get pregnant. Irregular bleeding is the most common side effect of Depo Provera, especially in the first six months of use.  For some women, periods become fewer and lighter, and may even stop.

Women who get pregnant while using birth control may notice the following signs and symptoms: a missed period, implantation spotting or bleeding, tenderness, or other changes in the breasts.

You can continue having the injections to protect against pregnancy if you’re sexually active and don’t currently wish to have children. This is only based on if you find the method suitable for you and you have regular checkups with your doctor. Note that longer usage is likely to affect our bone mineral density.

If you miss an injective contraceptive, you will not be protected against pregnancy. Depending on the type, injections last 4─13 weeks. The amount of hormone which is injected to prevent unintended pregnancy will only last around 4─13 weeks. It is important to keep a good record of the dates you take contraception.