With its caffeine content, you must be curious to know health facts about coffee or even the benefits of drinking coffee. We will break it down here so you no longer have to worry.

Coffee is a popular beverage made from coffee beans. There are several health facts about coffee, and it is mostly consumed for its ability to boost an individual’s energy levels and increase mental alertness. Some people regularly take it as the first thing consumed in the morning to begin their day. Coffee contains antioxidants and is taken mostly for its energizing effect. Other than that, coffee has been associated with several potential health benefits. This article explores some of the many health benefits of coffee. 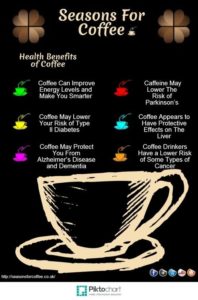 A major ingredient of coffee is caffeine. Caffeine is a known stimulant of the central nervous system that can attack fatigue and boost an individual’s energy levels. Caffeine does this by blocking adenosine receptors and increasing the levels of other neurotransmitters in the brain that control the energy levels of an individual. Studies have found out that when an individual consumes caffeine,

When coffee is consumed, the caffeine present in it stimulates the brain. As a result, the individual’s mental alertness is increased and the individual is able to think clearly. Even if an individual has been deprived of sleep, drinking coffee can improve alertness and reduce fatigue.

The daily consumption of coffee has been associated with a healthy heart and a significant decrease in developing heart failure. Some evidence shows that coffee can protect against arterial damage caused by inflammation, thereby supporting keeping the heart-healthy. A review revealed a 21% reduced risk of developing a stroke by consuming three to four cups of coffee in a day. Another showed that people who drink five cups of coffee daily have a 15% decreased risk of developing heart disease.

Since caffeine can affect an individual’s blood pressure levels, it is advised that people who do not manage their blood pressure should reduce their intake of caffeine.

Coffee contains a lot of antioxidants. There is a possibility that it can affect the sensitivity of insulin, inflammation, and metabolism. In the body’s pancreas, beta cells that are in charge of insulin production, which helps regulate blood sugar levels, can be found. Since coffee can preserve the functioning of the beta cells, it is believed that consuming coffee regularly can help decrease an individual’s risk of developing type 2 diabetes in the long term. A review of 30 studies links a 6% reduced risk of developing type 2 diabetes to one cup of coffee consumed by an individual.

5. Associated with Reduced Risk of Depression

Coffee has a variety of potential health benefits, and because of this, it has been implied that coffee could extend the longevity of people who consume it. A test-tube study revealed the potential of coffee to extend the longevity of yeast significantly. This observation was made as it was found that coffee could protect the yeast against free radicals and DNA damage. This, however, has not been discovered in humans.

After analyzing the results from a review of 40 studies, it was concluded that regardless of an individual’s age, weight status, or alcohol intake, drinking two to four cups of coffee a day is linked to a reduced risk of death.

Results from various studies has suggested that drinking coffee may help fight diseases and give support to the liver by reducing an individual’s risk of dying from conditions such as liver scarring, liver cancer, non-alcoholic fatty liver disease, liver cirrhosis, and chronic liver disease.

Research revealed a 15% reduced risk of dying from chronic liver disease by consuming a cup of coffee daily, while a 71% reduction has been linked to consuming four cups of coffee daily. A recent study associated the regular consumption of coffee with reduced liver stiffness. Healthcare professionals can use this to assess fibrosis and the liver for scar tissue formation.

To enhance one’s physical performance, coffee can be taken as an ergogenic aid, especially by athletes. Drinking coffee before and after exercising can help fight fatigue. It can extend the length at which an individual can exercise by supporting endurance levels. Studies have shown that drinking coffee can help improve one’s physical performance by enhancing energy levels, improving endurance, increasing gait speed, and reducing perceived exertion.

Due to a variation in results from a review, it was concluded that caffeine intake has different effects on people. This conclusion was drawn because it was discovered that not everyone had the same reaction of improved power output and time-trial consumption when they took a moderate quantity of caffeine.

Research has revealed that several studies have shown mixed results in the association of coffee drinking with brain health. However, it was observed that there was a decline in the development of some neurodegenerative disorders such as Parkinson’s and Alzheimer’s disease.

Research has it that drinking coffee can be good for weight management by altering the storage of fat in the body and supporting the gut’s health. Studies have shown an association between increased coffee consumption with reduced body fat in men and women. One study revealed that when compared with people who consumed less than a cup of coffee daily, people who consumed one to two cups of coffee daily were more likely to perform well physically.

Although coffee has been linked to many health benefits, such as increased energy levels, some people are required to limit their coffee intake. Such people include:

Coffee should not be taken in excess because it can affect an individual’s quality of sleep by leading to insomnia. It can transiently affect the blood pressure levels of hypertensive patients. However, a moderated number of three to four cups of coffee a day has been considered safe for drinking for most adults. It has been associated with various health facts and benefits, as discussed in the article.