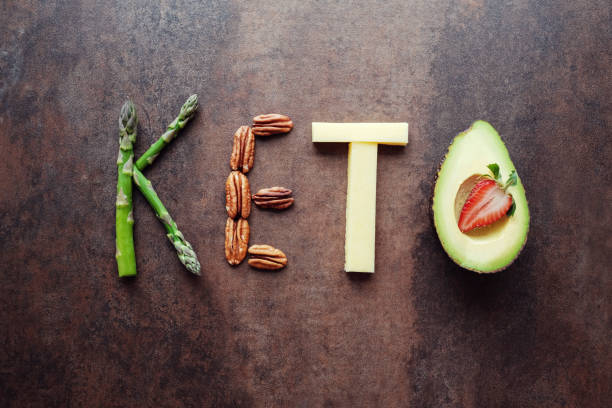 About The Ketogenic Diet

The ketogenic diet began in the early 1920s and 30s as a form of treatment or therapy for epilepsy. Still, when new anticonvulsant therapies were introduced, it was forsaken by the general public. As a special diet, the ketogenic diet was developed to aid epileptic children who did not respond adequately to routine anti-epileptic treatments. It later re-emerged as an effective formula to lose weight rapidly.

Popularly known as the keto diet, the ketogenic diet is an eating plan that involves the intake of high-fat, moderate protein and extremely low carbohydrates. It is generally embarked on to lose weight. It has been reported to have several health benefits, such as helping with Alzheimer’s disease, diabetes, cancer, and epilepsy. In addition, it reduces blood sugar, insulin levels and reduces hunger hormones. 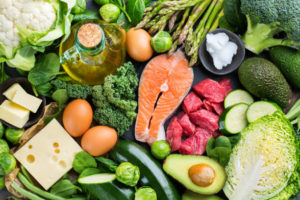 Generally, the body utilizes carbohydrates as its primary source of energy production, but with a ketogenic diet, the case is different. A few days into a ketogenic diet, the body goes into a metabolic process known as ketosis. In ketosis, the level of carbohydrates consumed by an individual is significantly reduced and is replaced with fat. When this happens, there is a depletion of stored glycogen and insulin secretion decreases.

During ketosis, the body derives energy from fat rather than carbohydrates. Protein is taken in moderation because the body converts protein to glucose when consumed in large quantities. This can result in a slow transition into ketosis. In addition, the liver converts the fat to ketones to provide the brain with energy.

One way of going into ketosis is via intermittent fasting, which commonly involves fasting for 16 hours and eating food within the remaining 8 hours. Indicators of successful transition into ketosis are:

However, to confirm a smooth transition into ketosis by measuring the body’s ketones, blood, breath or urine tests can be carried out.

A standard ketogenic diet which is the most recommended version of the ketogenic diet, contains 70 – 80% fat, 20% protein and <10% carbohydrates. Therefore, it is essential to reduce the intake of high carb foods like foods rich in sugar, excess proteins and even most fruits.

A typical meal plan for a ketogenic diet should contain veggies and meat, which one should rotate because of their differing nutrients and health benefits. Although not all foods will help one’s ketogenic meal plan, below are recommended foods to be taken by people on the keto diet. 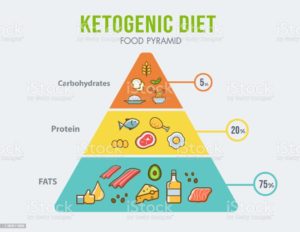 The ketogenic diet is mainly associated with weight loss, and this is rightly so because it does help to lose weight, especially when it is strictly followed. However, the good part about the ketogenic diet is that without mentally worrying about your food intake or counting calories contained in your food, one can still lose weight effectively because the diet is filling.

When compared with people on a low-fat diet, research has shown that people who undergo a ketogenic diet tend to lose more weight, especially in the long term. Although, factors such as the reduction in blood sugar levels, ketone increase and an improvement in insulin sensitivity may play a part in weight loss.

A medical condition characterized by an impairment of insulin function increased blood sugar, and metabolic changes, diabetes is a chronic disease that prevents the body from using the sugar consumed as a fuel source. Type 1 diabetes is an autoimmune condition that leads to the prevention of insulin production, while type 2 diabetes is associated with insulin resistance.

When carbohydrates and starches are consumed, the body breaks them down to glucose which is taken to the cells in the body with the help of insulin to serve as a source of energy. Insulin is a hormone that also prevents sugar production in the liver. Diabetes results when the glucose level found in the blood is higher than it should be. When on a keto diet, the ketones produced can help to reduce the levels of glucose and insulin in the body by improving glycemic control.

It has been reported that persons who have type 2 diabetes improve their condition when they embark on a keto diet. One study showed a reduction in weight, reduced medication, and decreased haemoglobin A1c levels in type 2 diabetic patients.

Maintaining a ketogenic eating plan may be challenging to keep up with. But once embarked on, it is crucial to know the foods to take and incorporate them into one’s diet. The keto diet does have some short term adverse effects, which may occur within a few days or weeks. These adverse effects may include:

Like everything done in excess is not good, a long term keto diet routine has some adverse effects. Some of the risks include:

It is essential to contact your physician to monitor biochemical changes in one’s body.

Pregnant and nursing mothers, and people at risk of developing health issues such as kidney damage, heart disease, and type 1 diabetic patients, should not carry out a keto diet.

A keto diet is generally good for most healthy people, overweight people, and diabetics.

Whether or not the keto diet is good for diabetic patients largely depends on the type of diabetes an individual has. Positive results have been reported for overweight type 2 diabetic patients, although there are few studies on its sustainability in the long term. However, for a type 1 diabetic patient, it is advised that they talk with a physician.

The ketogenic diet has been reported to work effectively for people who want to lose weight. However, its sustainability in the long term has not been adequately researched.